Other Great Blogs and News Sites

And the Orange Book patent listing champion is . . .

September 26, 2018
Over my years of using the Orange Book Companion® (“OBC”), I have occasionally noticed patent listings for a product that seem to go on forever. At that time I might wonder which product of the many products in the Orange Book has the most patents listed. But other priorities would intervene, and I never did anything to satisfy my idle curiosity until now.

At first I thought that this would take a lot of coding to get the answer from the FDA’s monthly raw data. Then it came to me that the OBC’s “master” table (from which all of the tables that subscribers see are derived) could be my source rather than the FDA’s raw data. Five minutes later I had the answer. It’s a three-way tie at 36 patents per product! The champions of patent listings are:

Not surprisingly, the patent listings for AFREZZA (an insulin product administered by inhalation using a  proprietary device) and BYDUREON PEN (an injectable product administered using a proprietary injection “pen”) are bolstered by a number of device patents. Also not surprisingly, the patent listings for HYSINGLA (an extended-release hydrocodone product with abuse-resistant properties) include a number of formulation patents.

If you would like an overall view of how the number of products having a given number of patents looks in graphical format, take a look at this: 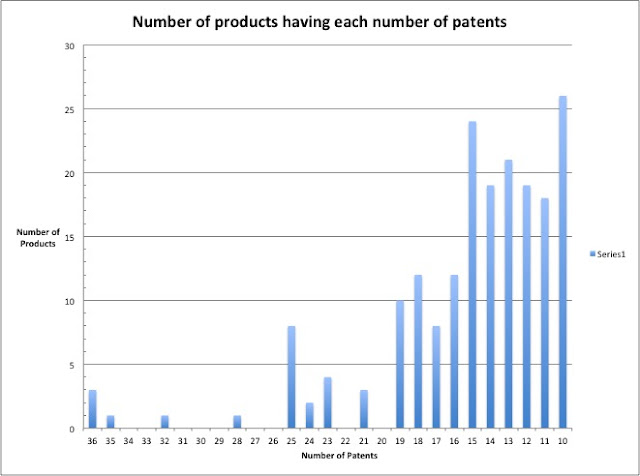 I left out the products with <10 patents since the numbers skyrocketed so high that it made the rest of the bars look very tiny.

Easy Way to Investigate the Patents of the Three Champions:

For anyone who is interested in an easy way of looking at the Orange Book patent listings for the three “champions” described above, I have added links to their full patent and exclusivity portfolios on the OBC public home page. A subscription to the OBC is not required. Just look for “Orange Book Patent Listing Champions” in the center of the page.The portfolios for the three products are in “Orange Book Companion format” which means that each patent record includes a link directly to the patent at the USPTO, and also shows the patent title, Drug Substance and/or Drug Product flags (if any), Use Codes (if any), the types of claims found in the patent, and the length of a patent extension under 35 USC 156 (if any).

So how did this happen? The ancestry of the ‘804 patent shows that it claims priority back to a non-provisional application that was filed on October 30, 2001 and to a provisional application that was filed on October 30, 2000. Could it be that someone at Purdue (or a legacy company) calculated the 2020 expiration date for the 80 and 100 mg strengths by mistakenly adding twenty years to the provisional filing date rather than the non-provisional filing date? Perdue, that will be your job to investigate. But one of the dates has to be incorrect. You may also wish to investigate whether any of the October 30, 2020 expiration dates are correct, since all of the patents with that expiration date appear to be in the same family as the ‘804 patent.

Popular posts from this blog

April 19, 2022
New Dosage Form in the Orange Book   One day in mid-August of the year I turned sixteen I came down with what I thought was the worst cold that I had caught in many years. I had a constant runny nose for two weeks straight. That was accompanied by itchy throat and eyes. Finally, after two weeks of this suffering I went to a doctor. After I described this bad cold to him, he asked me if I ever had pollen allergies. When I told him “no” he answered, “well you have them now”!   That started me on a lifetime of allergy treatments that continue to this day. I did not need corrective lenses for many years. However, when I finally needed them I felt that I should not risk using contact lenses due to itchy eyes during allergy season for which eye drops and oral antihistamines were of limited help.   Now the FDA has approved a new type of contact lens on February 25. 2022 that could have “let me have my cake and eat it, too”! It is Johnson & Johnson’s  Acuvue Theravision with Ketotifen  con
Read more

June 22, 2020
The Biologics Price Competition and Innovation Act of 2009 (“BPCIA”) contained a provision that would change the NDAs for biological products to BLAs after the tenth anniversary of the BPCIA’s enactment. [See section 7002(e)(4) of the BPCIA]. As I discussed in my last blog posting, the FDA deleted, on schedule, all of the biologic products that were listed in the Electronic Orange Book (“EOB”). Except for Sanofi’s two insulin glargine products, LANTUS and LANTUS SOLOSTAR.    I sent a message to the Orange Book Staff about their retention of the Sanofi products in the EOB, and they responded by referring me to legislation called the  Further Consolidated Appropriations Act, 2020  (“FCAA”) that was passed by Congress just before their holiday recess on December 20, 2019. Three pages of the 715 pages of the FCAA, pp. 594-596 ( Sections 605-607 ) contain amendments to the Public Health Service Act (“PHSA”) and BPCIA provisions that involve biological products.   Through a cursory search I
Read more

The free version of the Orange Book Companion 's "What's New" for Vol. 42/Supp. 2 of the FDA's "Orange Book" is now available on the OBC home page . Just click on the prominent " What's New for Patents and Exclusivity " link. Sixty-one new patents were listed in the Orange Book during February, and one patent was delisted. And while you are there, please take a look at free samples of my new  Orange Book Companion  feature. That is  Patents Grouped by Patent Family . Instead of the usual list of patents for a product in numerical order, the patents for a product are grouped by patent family. I used an alternating color scheme of yellow and blue cells in each table so that users can easily see where each family starts and ends. So if you are a fan of drugs whose trade name or generic name starts with "A" you will be able to see exactly what this new feature will give you. Just click on the free sample links, " Tradename-A Fami
Read more

For over fifteen years between Pharmacia and Pfizer (until Pfizer went to a committee structure) I was the sole patent attorney responsible for all of Pharmacia's and Pfizer's patent listings in the Orange Book and for drafting our requests for Hatch-Waxman regulatory exclusivity. This included creating systems to assure that no potentially listable patents were ever overlooked.

In the Pfizer committee, I created and was responsible for updating a summary of the law and regulations for Orange Book listings and the regulatory exclusivities that are available in the U.S. I also created line-by-line instructions to be used by Pfizer’s product patent attorneys for completing the FDA’s patent submission forms, 3542a and 3542.

See me in my “I Love the Orange Book” t-shirt? That was a retirement present from my Pfizer colleagues in Groton, CN.